Food and a rant

Feminism. Is it really a scary word? Despite the new cultural angst over the idea of feminism, I identify myself as a feminist. The problem? I'm doing a first-year law course (I would name it, but to save myself the heartache....) with basically the intent to persuade the students of their responsibilities to act morally and their duty to help others in society. This is a very "leftie" agenda. I, as one who celebrated Kevin Rudd's victory with a smashing hangover, think this is a great idea (as do many of the students, conservative or not!). However.....
This week's topic was "Gender and Race" - basically an analysis of access to justice/legal assistance from the perspective of women and non-white people. I was surprised to find that I was the only person (other than our awesome female tutor) that identified themselves as a feminist (most of my class is under the age of 20). They didn't seem to think that feminism was really required anymore. One fellow classmember actually listed the reason that they didn't identify as a feminist was that "the boys laugh at feminists. They think they're dikey lesbians". !!!!!! Notwithstanding the utter disparity in this statement, I want to say a few things....
We need feminism for everyone. Feminists don't hate men! They want equality for everyone! This means equality in pay and treatment. We're not going to get change unless we push for it.
I know I'm not the most articulate when I'm angry, so here's a video that you must watch (thanks to my favourite feminist website Feministing for the link):


And now, as advertised, food!

I think this may have come from Vegan Fire and Spice? Sorry Cam, I remember it was tasty though! I call it "Cam's chickpea dish with mashed potatoes and hummus". I do remember that I put nooch and smoked paprika in the potatoes! 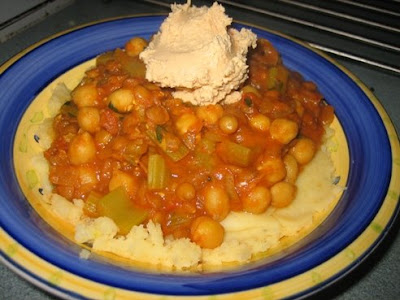 Moroccan Chickpea and Lentil Soup. This did come from Vegan Fire and Spice. Yummers. 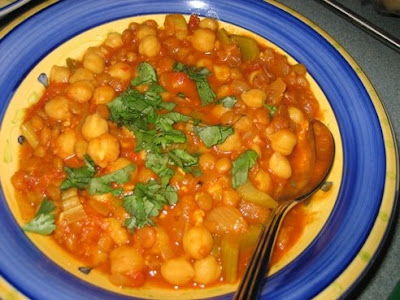 An awesome photo of my Dad slicing Veggie Roast with his fancy knife. I heart this knife. Check out the wafer thinless of the slices. 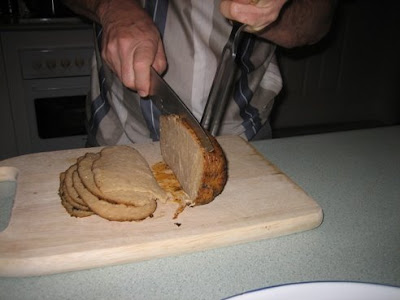 Cam's been making lots of Indian curries (as always they're awesome). So here's a small selection (there's a bit of a theme here!):


Chilli Potatoes (These burn for me, but gosh (did I just say gosh? When did I turn into a polite person?) they're tasteeeeeee!) 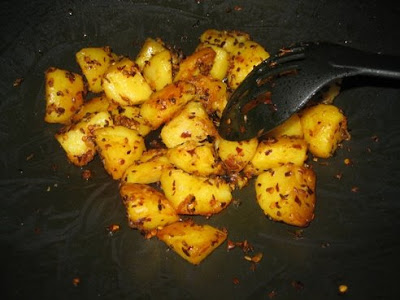 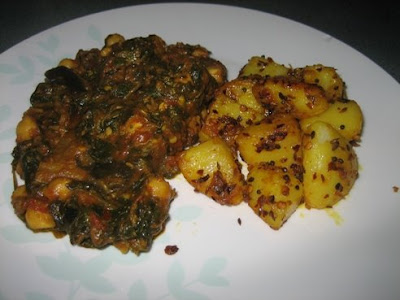 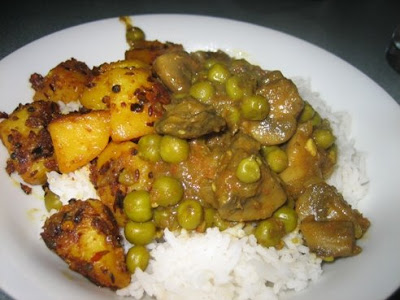 Leeks are finally available in Brisbane!!!! I've been waiting for Leeks to become affordable since getting Veganomicon.


Firstly, a Leek and Potato soup from La Dolce Vegan (it has carrots in it, thus the orangey goodness): 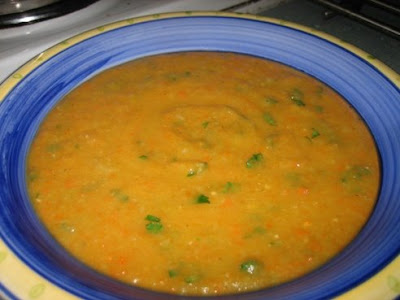 THE Leek and Bean Cassoulet from Veganomicon. So. Damn. Good. 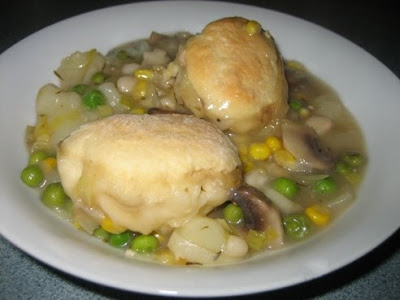 And onto my particular favourites, the non-savoury things!
Choc-chip Blondies with Rasperries from Vegan With a Vengeance! 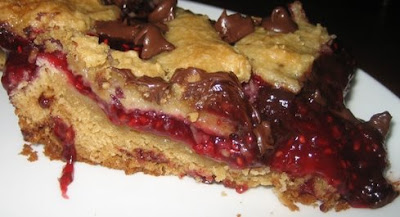 Fancy Mushroom and Red Wine Scrolly Bread. It was a bit tough, but still AWESOME. 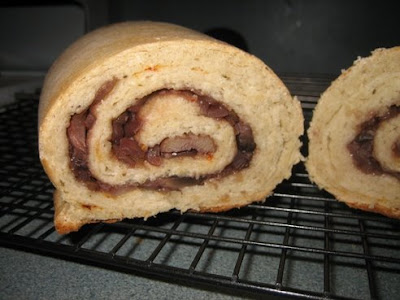 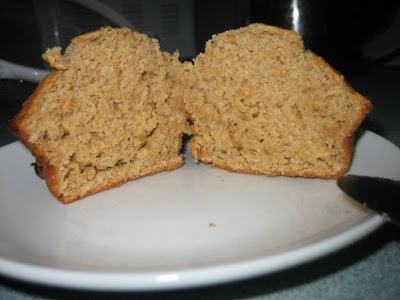 I attempted some apple scrolls based on Bittersweet's Pizza Scroll recipe. They just weren't sweet enough (more sugar is required in the dough!): 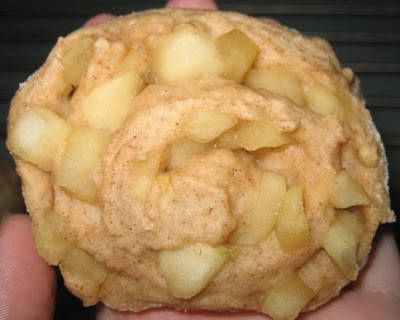 Finally, I'd had a crap morning at work and raced home for lunch before uni in the afternoon.... Someone was nice enough to leave me the last of the "middle" of the bread (I hate the end/crusty bits)! So I had the ultimate in convenience snacks: The (vegan) luncheon sandwich.


Thinly sliced Sanitarium Lunchon is sandwiched between two slices of High Fibre White Bread from Baker's Delight. Spread with Nuttelex, this sandwich will fill the needs of vegans on the run.... 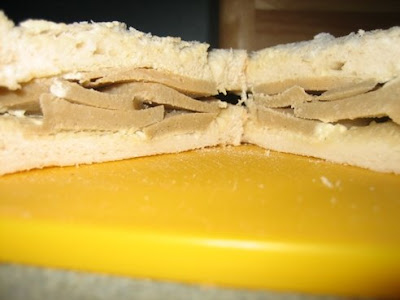 No, not beer - bread! After my success last weekend with the Cinnamon, Sultana & Craisin Bread, I made two savoury bready thingys.

Firstly, Calzones. The recipe is "Zucchini and Tofu Calzones" from Vegan Vittles. I added Mushrooms as well (and a bit of olive oil to the pizza dough for ease of manipulation). I served it with VWAV Pizza Sauce. 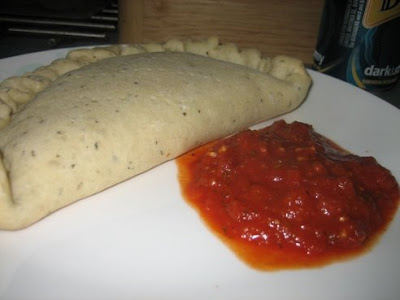 And secondly, and completely awesomely, Bittersweet's Pizza Rolls! OMG. Seriously. The. Yummiest. Thing. I've. Ever. Made. The variation is from the VEST article (V'con Cashew Ricotta and Lachesis' Seitan O' Greatness). 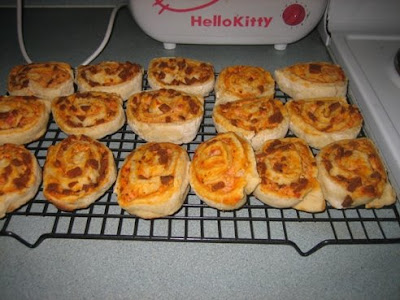 Up close (and yummy): 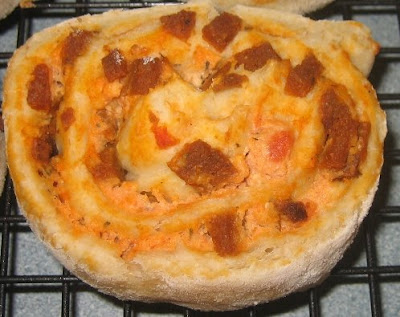 I actually made these scrolls twice today. I have to run, otherwise Cam will eat them all!
Posted by Amy at 9:32 pm 12 comments:

My name is Amy and I'm addicted to buying vegan cookbooks

Hey guys! Just a quick post to say holy crap I have a lot of cookbooks! (And I still have my eye on a few, particularly Yellow Rose Recipes....)
New ones include:
Cozy Inside by Jonie Marie Newman (which may include a reference to Iron Chef Vegan?). Am I famous now? (It's in the list of blogs to look for. I screamed out to Cam when I saw it!)
My Sweet Vegan by Hannah Kaminsky. Jeebus. This book is just worth it for the pictures (and to be honest, that might be a little more healthy!). I've made the Peanut Butter Bombs. SOMEONE ate most of them. I had one. It was yum!
Soy, Not Oi! edited by Joel Olson. This is just an entertaining read. The recipes do look good though.
Hot Damn and Hell Yeah! by Ryan Splint / The Dirty South by Vanessa Doe. I'm learning lots, particularly about tex-mex & Mexican food, from this one.
Vegan Fire & Spice by Robin Robertson. Cam's already made Moroccan Chickpea and Lentil Soup. Pictures to come!
Vegan Vittles by Jo Stepaniak. I've already earmarked two recipes from this!
Vegan Planet by Robin Robertson. This book is HUGE! (It only arrived today with Vegan Vittles - the Australian postal system is so good (not) - expect recipes from this tome soon!)
The updated list is on the sidebar. What to buy next? I believe a certain Australian is coming out with a cookbook soon?
Hope everyone's week is going well. I'm up to my ears in the Tort of Negligence. Woot!
Posted by Amy at 5:33 pm 6 comments: