We started in Santa Cruz and had the 'free' breakfast at the hotel (which had the worst shower ever made).

We headed into San Francisco.  We stopped at the Legion of Hono(u)r.  We thought it was going to be some sort of war memorial.  Turned out to be a pretty good art museum.  We spent about 90 minutes wandering through.  We really enjoyed it - despite the fact that neither of us know about visual art at all.

We drove down the hill to Baker Beach and got some awesome shots of the Golden Gate bridge (isn't Cam getting good at the artsy shots? :)) 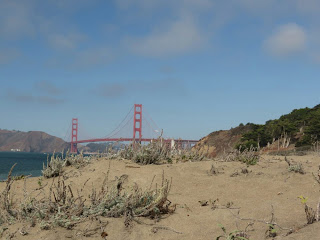 We then headed over to Berkeley.  Stopped at a little vegan cafe for a super late lunch.  It wasn't particularly good, so I won't waste your time with those photos.

For dinner we headed to Herbivore - The Earthly Grill.  It was really freaking good. 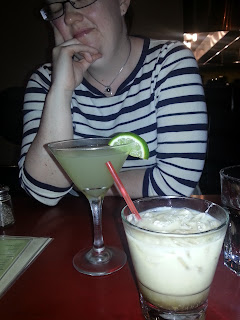 We had the vegan nachos: I had the quesadillas: 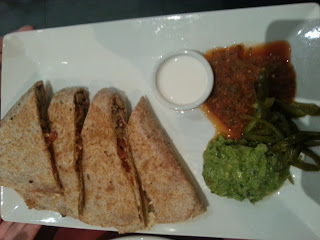 Cam had the orange pepper chicken: 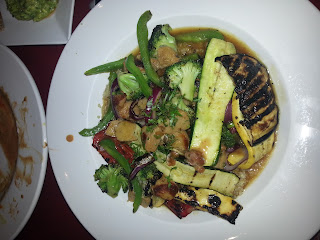 We headed to the Albatross Bar for a few drinks after dinner (it was just down the road from our hotel).  It was a pretty cool bar.  They had games, so we played a round of chess, connect 4 and boggle.  I only won at boggle (Cam whopped me at the other ones).

On day 6 we headed into San Francisco on the train. That's for another post!
Posted by Amy at 4:10 pm 1 comment:

We headed out of Pismo Beach at the crack of dawn.  We stopped at a little cafe in San Luis Obispo called Linnaeas.

We had an orange and pomegranate muffin. 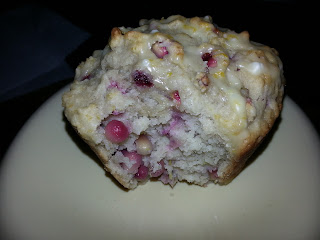 It was pretty good.  It was not a flavour combination I would have guessed would work.

We drove north along the Shoreline Highway most of the day.  Saw some pretty incredible views.  (I'll add more photos from Cam's camera when we get home).

We stayed the night in Santa Cruz.  We stayed across the road from a super depressing casino.

For dinner we went to the Saturn Cafe.  We had shakes to start.  I had the mint chocolate chip and Cam had the vanilla.  They were basically melted ice-cream.  (not pictured because we inhaled them so quickly).

I had a 'chicken' burger and Cam had the jalapeno burger: 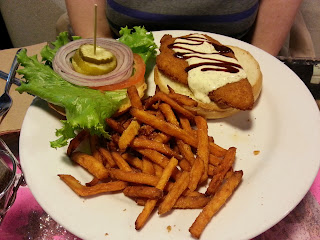 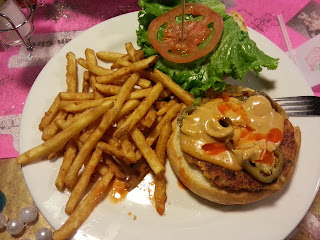 We split a short stack of pancakes to finish.  NOM! 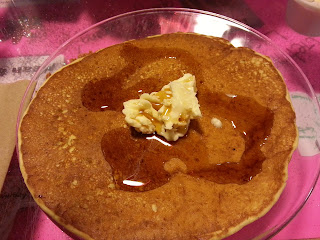 On day 3 we headed out of Los Angeles into Santa Barbara.  We visited the Mission there (it was pretty cool - Mum and Dad, you should definitely visit - it has a religious retreat thingy and a Moreton Bay Fig!).

Breakfast that day was in LA.  We visited Trader Joe's again for Tofurkey.  Damn, even the cardboard was good. 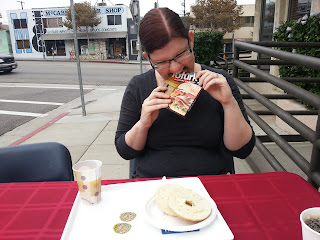 After visiting the Mission, we stopped at Whole Foods to grab a few things for a picnic lunch.

Our heads may have exploded inside the store.  This is a few photos of the cold section: 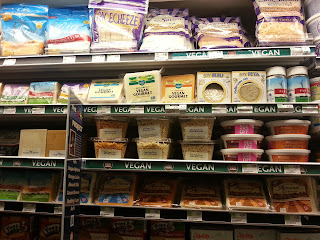 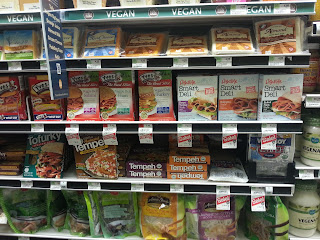 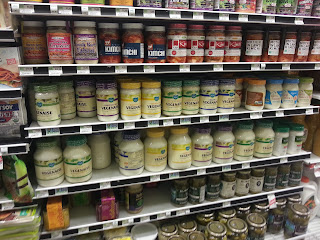 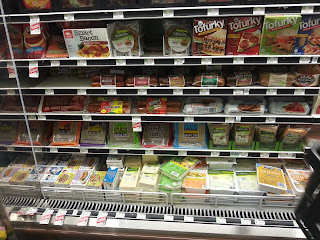 For lunch we had pizza from the in-store food area.  THEY HAVE VEGAN PIZZA.  FOR THREE DOLLARS. 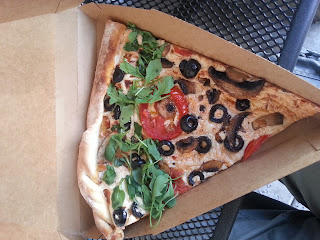 For dinner we had a selection of Tofurkey deli slices, olives, Daiya cheeze and yummy sourdough bread.  (We didn't get a photo of this spread).

We also headed to the Designer Factory stores at Pismo Beach.  Cam bought so many work shirts (he was excited 'cause now he can get away without ironing for more than two weeks at a time).

On Day 4 we headed to Santa Cruz.  Post to come shortly.
Posted by Amy at 2:51 pm No comments:

Howdy  everyone!  This is our belated beginning of Vegan Mofo.

We arrived in LA at about 6am yesterday morning.  The hilarity started when we were lining up for customs.  Their air-conditioning had broken down, so the nice woman from delta was having issues with her colleagues on the walkie-talkie.  I guess you had to be there.  They were complaining that it was hot.  They haven't been in North Queensland in February, so they really have NO IDEA.  Lol.

Anyway, after picking up the car (and getting used to driving on the other side of the road), we headed to Veggie Grill for lunch.

WOW. This place is relatively new as far as I'm aware. It was so good! I had a Chikin' Burger thing, Cam had the Bayou burger, and we shared Buffalo Wings. 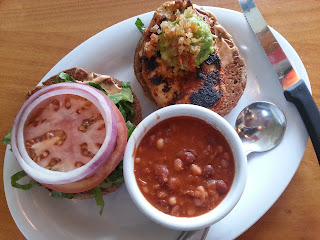 Pretty freaking awesome. probably only We managed to stay awake all day (despite not getting much sleep on the plane). We headed to the Snake on Mullholland Highway. Cam tells me it's some sort of motorcycle thing. There were lots of bikes winding up and down the road. Pretty cool.

After checking in to our nice hotel in Santa Monica, we walked down to the pier. So cool! We took a ride on the Ferris Wheel and watched the sun set. Cam got a pretty awesome photo: 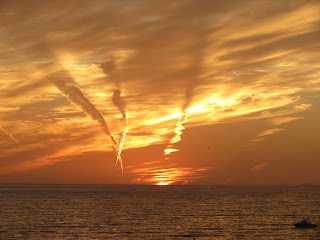 We then headed to Real Food Daily for dinner. We've had the Real Food Daily cookbook for many years (and have only made one recipe from it - I'm lazy and a lot of the recipes seem to be pretty long). We started with the Lentil Walnut pate: 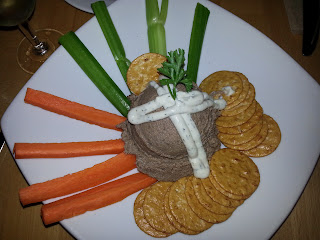 I had the Supreme Burrito (it was deliciously cheezy and yummy): 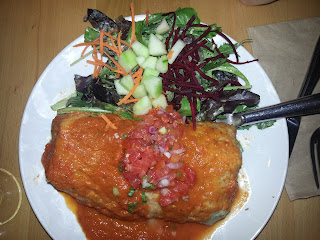 Cam had a taco: 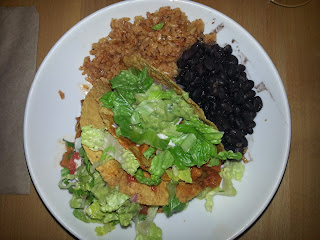 We shared the brownie bowl for dessert. 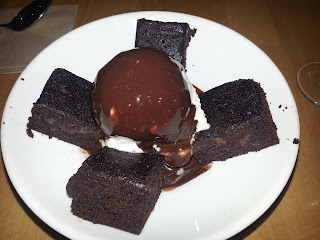 This morning we discovered that there's a Trader Joe's right on the next block. So we had Hickory Smoked Tofurkey on sourdough (OMG, that Tofurkey). 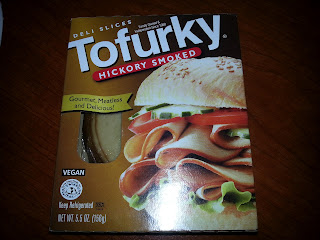 Lunch was at Native Foods Cafe in Westwood. This place was so cool! I had a meatball sub. Cam had a bacon cheeseburger. 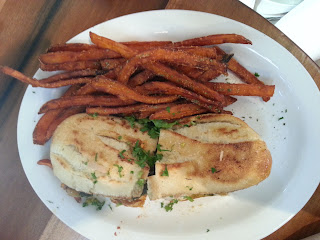 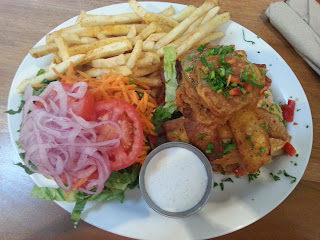 I'm running out of superlatives to describe how good the food was. We thought we should start a goodly meter for the food. (This was actually the conversation at Native Foods)

Dinner was takeaway from Vegan Thai in Santa Monica. We had Tom Yum soup, Penang Curry, Pad Thai and Mango and Sticky Rice. It was spicy but good. 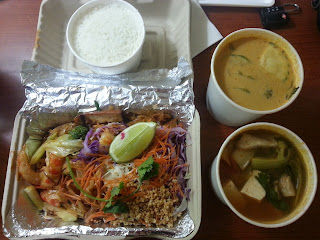 Hi. No excitement today. We're madly preparing to leave on holiday on Saturday. I'm testing out blogger on my tablet.

In lieu of an exciting food post, please accept the following animal pictures. 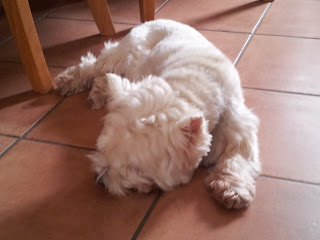 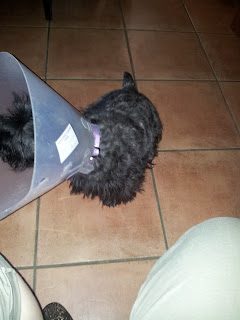 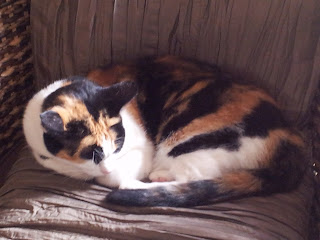