So, and obviously I neglected the blog for the rest of the trip. Rest assured that we took lots of food photos to share. (yes, the wedding was beautiful, yes, we'll share photos on Facebook when we get the proper ones)

We decided to spend all of day 6 in the big smoke. We took the train across the bay to Powell, Street station. Which was cool. Ended up in the centre of the city. First stop:the food court at the bottom of a fancy shopping centre.

What did we find? Loving Hut! It was pretty much awesome. (and none of that super annoying indoctrination television in the background!!!!!)

I had a Pho soup. 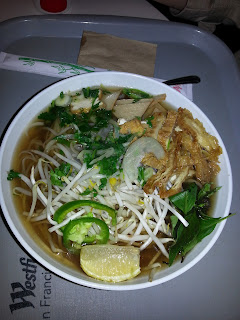 Cam had a some stuff from the warmer, including the biggest pile of kale I've ever seen! 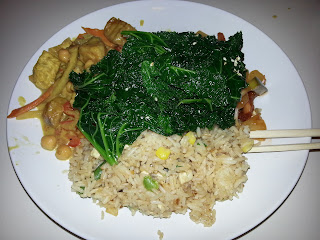 Our dinner in San Francisco was at a rather fancy restaurant. Millennium deserves a post of its own don't you think? ;)
Posted by Amy at 11:03 pm No comments: